During the summer 2018 Kelsall village in Cheshire posted a call-out to all its residents and friends as part of the “October Cancer Awareness Month” national initiative, to participate in a Sponsored Pink Charity Walk around the village.

The aim was to help raise funds for two special cancer-support charities. Being a member and supporter of North West Cancer Research (Kelsall Branch) and of course the Pool Of Life charities since the loss of my wonderful wife Denise following her two year battle with breast cancer on 23rd August 2016, I felt it was a great opportunity to do something that we in the village had never previously undertaken. We were looking for family and friends (and their doggy friends) to join us all together for the very first Sponsored Pink Charity Village walk. Being fortunate to reside in a rural part of Cheshire with lots of local walks it was a simple idea which gave us a great opportunity to come together and for us all to do our bit in supporting charities dear to our hearts.

Some months earlier I had met a lady Ann Cheers from Backford at a Breast Cancer Now – Bucket Appeal day at M&S at Cheshire Oaks Outlet Village and as a breast cancer survivor herself she told me of an event they had held in her own village when her daughter later had also been diagnosed with breast cancer.

They have both undergone treatment and are both doing well. I told Ann about losing my wife, Denise to breast cancer and how I wished to do something positive in her memory.

Ann explained that she had organised in her village a successful Sponsored village walk and suggested to me that maybe this was something we could do in Kelsall. We met again some weeks later, and she explained to me how they had gone about it. Following this, I met with friends from our local branch of NW Cancer Research, and we decided that we should explore the idea and of course they were so happy to include Pool Of Life.

While the idea is so simple, this was the very first Pink Charity Walk ever held in our village, we did not have a plan, or even route, and we had no idea of how many people may support us. It was evident to us, of course, the bigger the number of participants, the more difficulty we would have in managing the walk, which we envisaged following Kelsall Village Pathways. While giving a country-walk feel to the event, it tended to have vast changes in ground levels and types of walking terrain, and we would be crossing multiple farmers’ fields all occupied with sheep and cattle.  These were some of the issues that we needed to address over the coming months.

We eventually decided upon a pleasant, relatively flat 3.5 mile circular walk with the minimum number of stiles and no sheep or cattle along the route,  and minimum stretches along public highways which were proposed and agreed to, with farmers, landowners, police, local authority and parish council. We also had through the kindness and support of one of the local farmers agreed a mid-point stop at which tea/coffee refreshments were provided.

We also decided upon a central start/finish point at our local Community Centre which gave us the opportunity to provide a “breakfast and refreshments” for all the walkers as they registered on the morning of the walk.

As our plans were coming together, we managed to bring onboard a large group of local volunteer helpers including marshals, helpers in the kitchen, and registration desks. Signs along the route had to be designed, prepared and then put out along the route. One aspect of the walk that proved to be crucial was how to make sure we marketed it to the maximum number of people in the area. This meant having a volunteer IT person to help us get the messages out over a 3 month lead time via our village website, local press, plus posters and leaflets designed & distributed, plus posts on Facebook, Twitter, local radio and village clubs inc WI and Gardening club.

On the 20th October, we arrived early to ensure all preparations were in place, all the signs put out, checking that all the fields were cattle free and that everything was ready in the Community Centre to welcome and register everyone. The day proved to be a grand success on a lovely warm and sunny day. Even though behind the scenes some moments caused us a little concern, everything went so well, and at the moment it needed to.

We had what proved to be a super, lovely and successful day out with over a 100 walkers (and dogs) taking part with people from our village, surrounding villages and of course the lovely ladies (and gents) from Pool Of Life. This was the biggest “Walk” that we have ever held in our village!

We are hoping to repeat the “Pink Charity Sponsored Walk” in October 2019 and would dearly love all my friends from Pool of Life to enjoy the day again!

(Write up) by Mike Meaney. 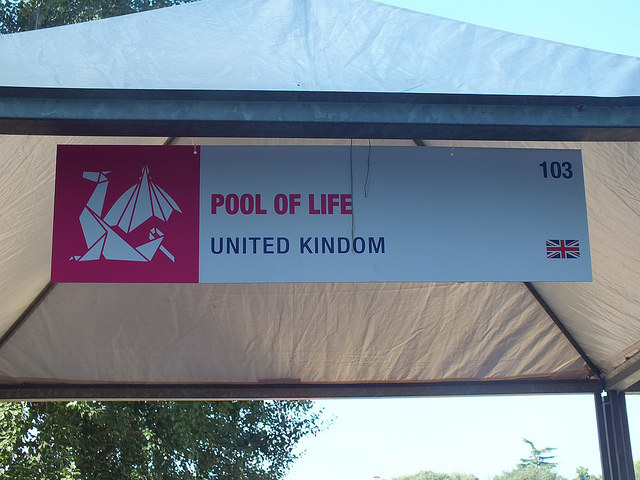