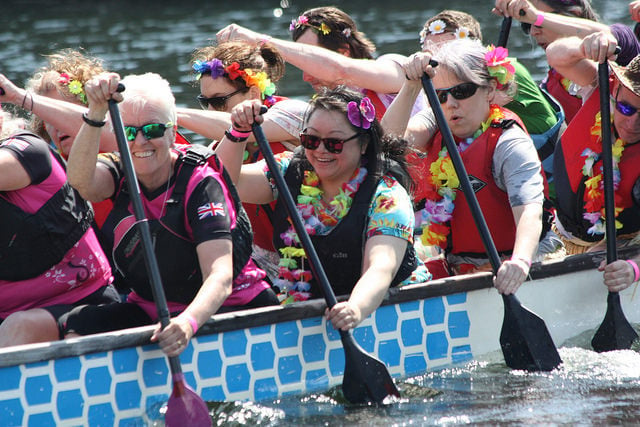 In glorious sunshine, teams from as far afield as Bournemouth and Donegal came together to join in the 2018 Dragons and Flowers event. As ever, the Pool of Life members worked tirelessly to ensure everyone got a real flavour of what it is like to be in a boat, paddle as a team and – for some – cross the finish line in first place. Without the support of members of Amathus, who helmed, gave safety briefings, took photos and acted as race officials, a day such as Dragons and Flowers could not take place. We are indebted to them, and say a huge thank you from all of us.

But the true stars of the day were our competitors, some of whom have been coming back to the event year after year. The sense of competition was palpable, with everyone checking their times for every race, trying to guess who would be in the final.

And what a final it was! Four teams took part – Water Co, Janet’s Gym, the Rotary club and Merseycare. All four had been paddling at sub 1min50 times, and all have taken part in the event before. It could not have been a more closely fought out race, or more exciting finale if we have scripted it. In fact, if we had scripted it, it would have seemed unbelievable. Just one second separated the winners, from the team which came in fourth place. For a video of the thrilling final, please click here. Here’s a video taken from the pontoon:

As you can see, Water co looked like they were taking the trophy home, but at the very last second, they were beaten by all the other competing boats. Here’s the photo finish, showing just how close a race it was. 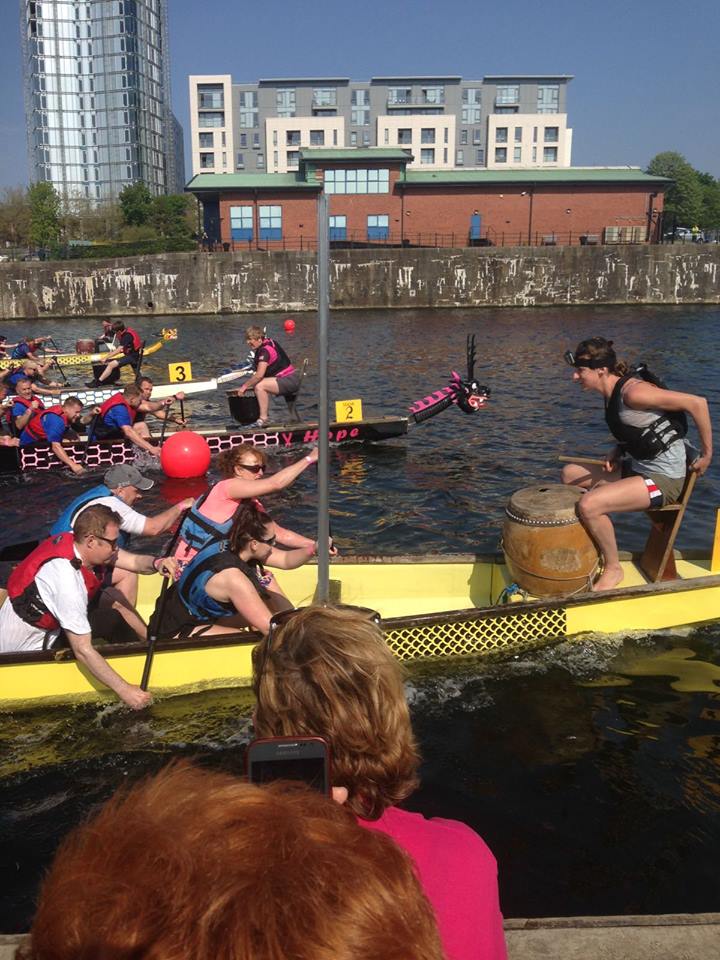 Well done Merseycare. Remember, we expect to see you back next year, to defend your title.

Whenever we have events such as Dragons and Flowers, we have some fantastic people who take photos for us and share them with us. Here are some of the photos taken by supporters on the day: 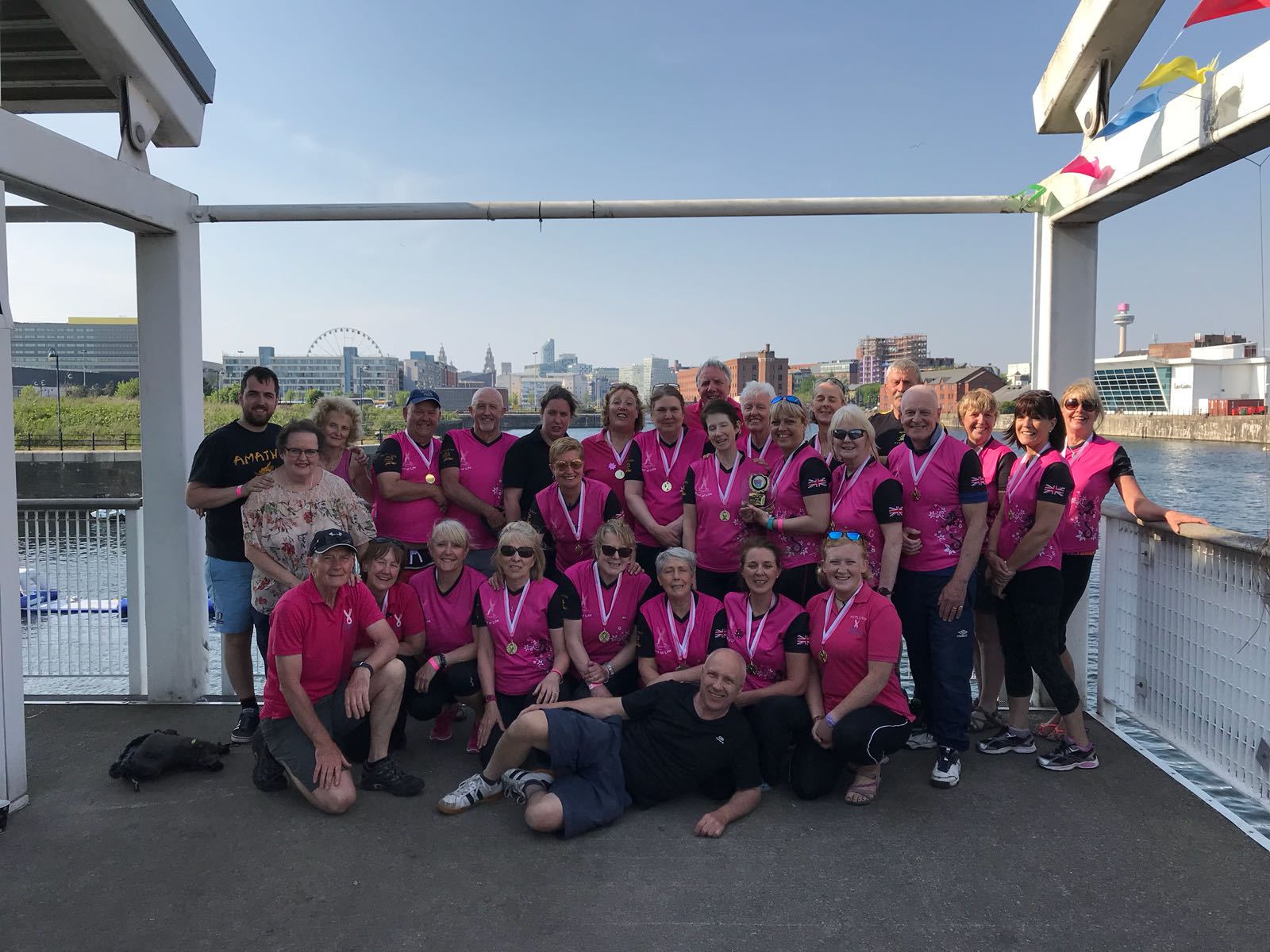 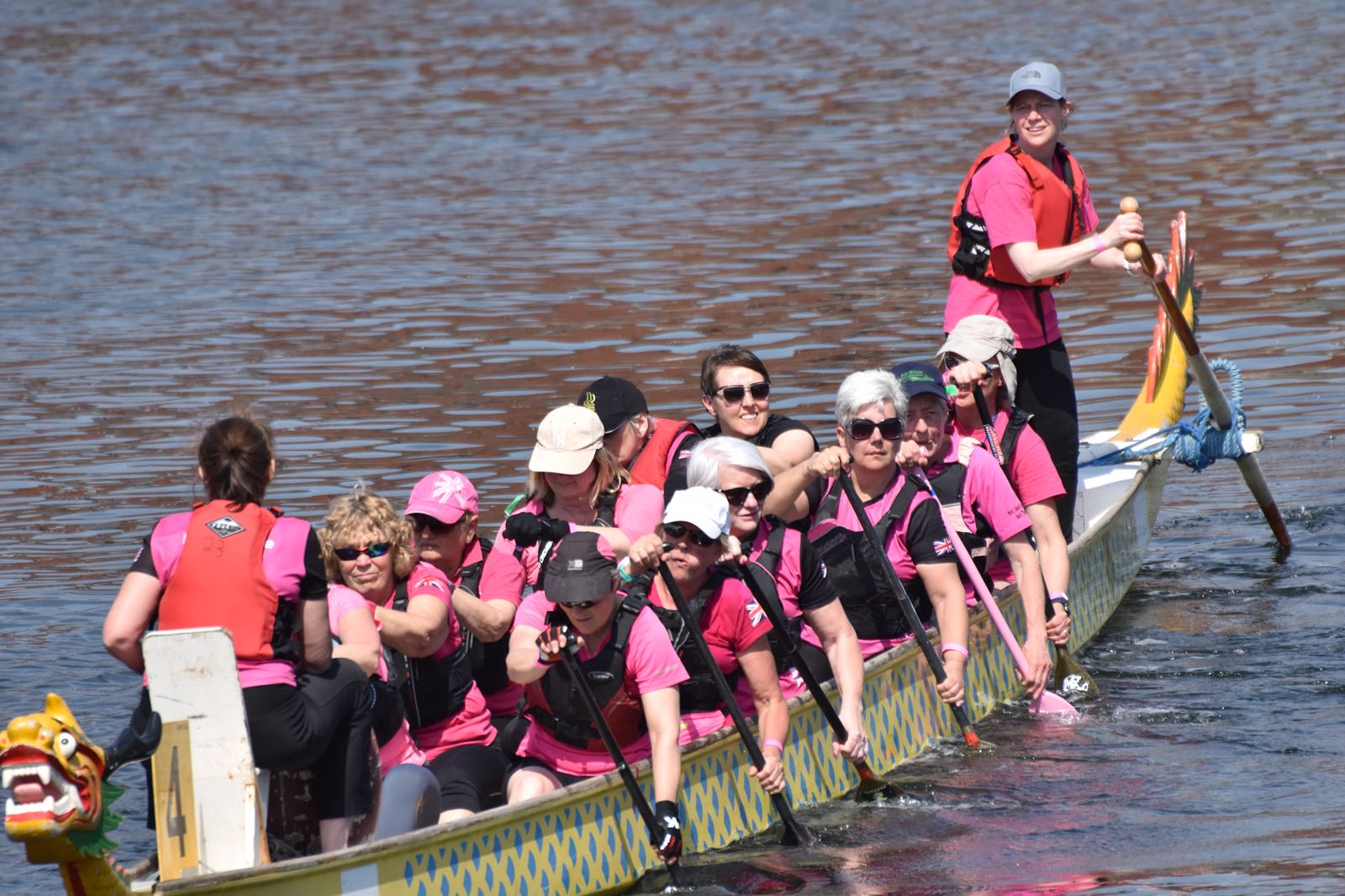 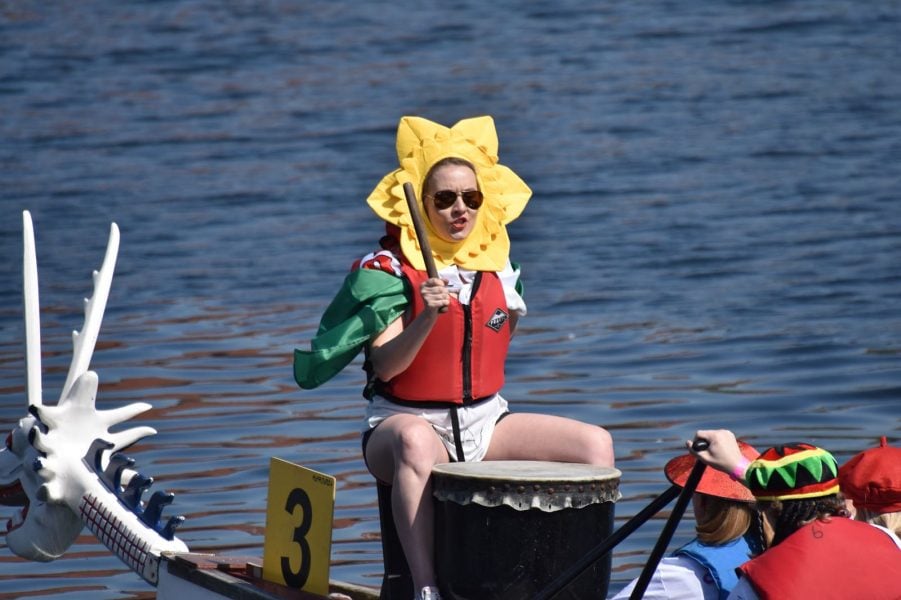 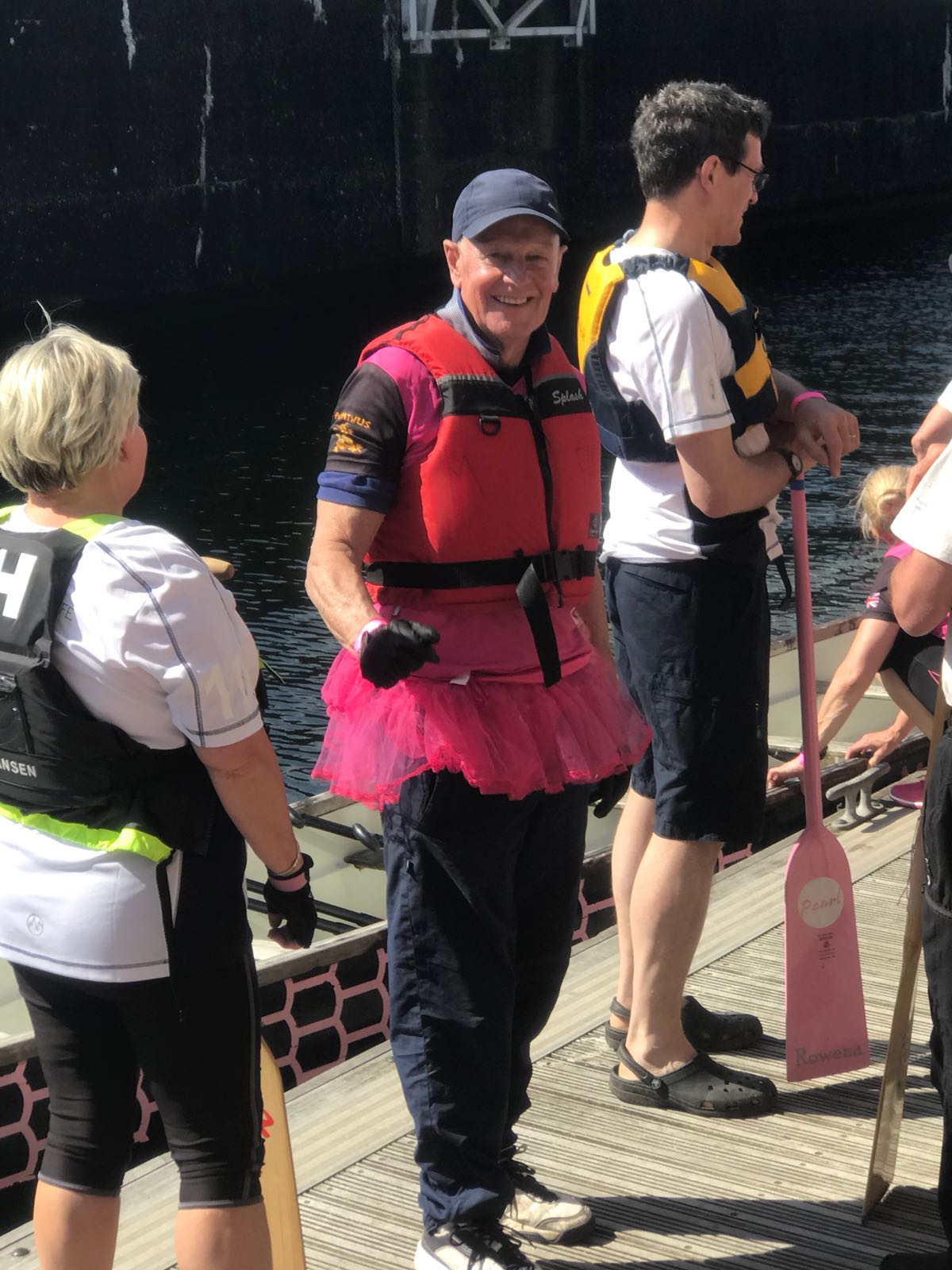 One of our Amathus paddlers, Edwin Robson, took pictures of the whole day and has kindly shared them with us through his Flickr account. Here are just a couple of his fabulous photos, but for all the rest please click here 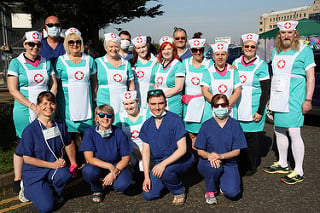 For everyone in Pool of Life, one of the most special parts of the day was the chance to race against three other Breast Cancer survivor’s dragon boat teams, please see here for a video.

One of the most moving parts of the day was sharing our flower ceremony with all these awesome women. Members from Pink Champagne, Paddlers for Life, Donegal Dragons and Pool of Life all came together to take a minute to remember those who are sadly not with us any more. As the whole dock sat in silence, one of our supporters took a photo of the only cloud to grace the sky in the whole of the day. 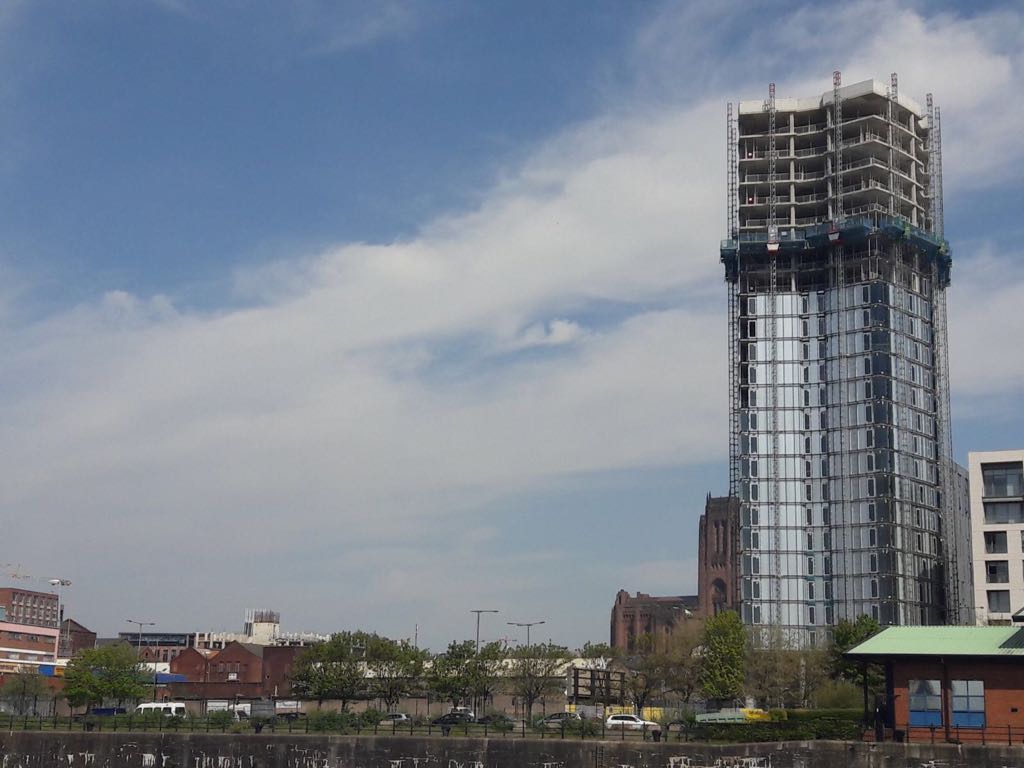 I can clearly see the nose and eye of a dragon, and perhaps it was sent by those who watch over us, their love never far away.

The total amount raised from the Dragons and Flowers event was an amazing £6,867.40 which will be shared between Pool of Life and Water Aid.

All that remains for us to say is a massive, massive thank you to all who came along to the event, got into the spirit of the day and made it such a glorious memory to look back on for many years to come.

Hope to see you all for our next Dragons and Flowers event on the 15th June 2019!